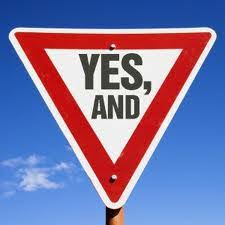 I started taking improv classes at the beginning of this year. As someone who is more likely to cautiously analyze and plan than go off the cuff, this stretched my comfort zone.

So why did I do it? For one, I wanted to do something fun just for me – as any parent will tell you, “me time” doesn’t come easily with two very young children. I also wanted to sharpen certain skills – like being faster on my feet.

But most importantly, my instincts told me that I would discover something cool and unexpected.

GETTING OUT OF THE COMFORT ZONE

On the morning before the first class, I felt more and more nervous. I almost turned around on my way there. I imagined a room full of people who always had the perfect, rolling-on-the-floor hilarious line right up their sleeve.

What was I doing there? Would I be humiliated?

But I still walked through that door, butterflies and all, because I knew that my greatest personal growth often came from situations in which I felt this kind of discomfort.

Improv was less scary than I imagined. We spent the first few classes just doing fun and easy warm-ups – and I loved it.

Then we got to what I perceived as “the REAL improv”. Uh oh – here it comes! Time to be exposed!

Each person was given a body posture, a voice characteristic, and some kind of tick by others on the spot. We would then use that to discover what character naturally came up, and do a scene as that character.

I was the last to step up, convinced that I would freeze like a deer in headlights. I finally stood up and walked slowly in front of the others.

My character was to have a confident straight posture, a loud voice, and be constantly primping herself. I was surprised that she came to me almost right away. I wasn’t the soft-spoken Mihaela with a European accent – I was Jenny, an insurance company executive from Kentucky.

And Jenny was a real ball-buster. She expected perfection, terrorized her team, had a loveless marriage, and made snide remarks about her “less successful” sister raising kids and tinkering around with a small business.

OK, so my characters have become a bit more nuanced since then – but most importantly, I threw myself in there – and I did it!

We rarely go wrong when we put ourselves out there.

So I kept on taking classes – and they became more and more comfortable and enjoyable. When I was eventually asked if I wanted to perform on stage in front of a live audience, I said YES!

I didn’t feel super nervous because I knew that even if I stumbled, others would be there to catch me. The love and support of this group is really special – all I needed to do was be myself.

Incredibly, I’ve been performing once a month ever since.

What I have learned in improv is incredibly impactful to life success and financial success – especially the concept of saying “YES…AND” instead of “BUT”.

This is the core of improv. If your partner on stage comes out as a goat, you don’t say “but goats can’t talk”. You accept their goatness and become their best pal, the talking pig!

Think about all the “BUTS” many of us say. All this talk about financial freedom and meaning is nice, BUT:

I could go on and on.

What if we said “YES…AND” instead?

YES, it’s in my power to be debt-free AND I’ll make a plan to get there?

YES, I can pursue my dream AND I’ll build a financial runway to help me get there?