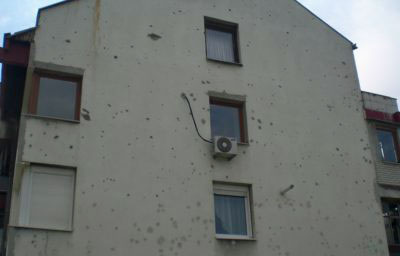 We can be sure of one thing: life will pitch us a curve ball or two. But that’s when our resilience can shine.

My childhood in Sarajevo, Bosnia was cut short by a war.

Tensions were building, but my family didn’t believe that a civil war was possible. How could friends and neighbors kill each other? I couldn’t even tell which nationality most people in Bosnia belonged to.

That all changed one morning when my family woke up to my hometown of Sarajevo being barricaded in multiple spots. I was 10 years old.

I still remember lying in bed that morning, listening to gunfire in the distance and feeling scared about what was to come.

We quickly threw a few things into our car and managed to get out of the city and to our mountain cottage close by.

My mom had to tell me to grab more things because we could be gone as long as “two weeks” – but I could tell she still thought that everything would blow over in a weekend and return to normal. The alternative was inconceivable.

It has now been 25 years since that morning – and it was the last time I saw my childhood home.

We spent the next few months in the mountain area where our cottage was located. Dozens of people from the surrounding homes, including us, would often spend the night huddled in one family’s house. The women and children stayed inside while the men patrolled the area with guns because of the reports of mass slaughter of nearby villages.

This fortunately didn’t last long – we were extremely lucky that we had family in a different part of the country who were willing and able to take us in. This meant that two families who had barely known each other were squeezed into less than 600 sq. ft. Their generosity was incredible.

The year the war started, I changed four schools.

In addition to adjusting to new environments, I had to learn to improvise because money was scarce. Shop class was particularly challenging, with shop kits costing what seemed like an exorbitant amount of money.

Instead of a shop kit with fancy wooden boards and a hacksaw, I ended up designing a miniature neighborhood using cardboard, glue and my special ingredient for building roads and fences: dried beans.

I didn’t have many toys in those days, so I made bracelets from tree branches, used leaves as play money, and read any book I could get my hands on.

Despite lacking “stimulating” toys or activities that are considered “necessary” for kids to succeed, I got an A in every class.

But the peak of improvisation came with my arrival to Canada at the age of 13.

We said goodbye to our family and friends, packed up all our possessions into two bags, and headed into our new life.

I was strangely excited about this new adventure. I had always romanticized North America, imagining it as a land of cowboys and outlaws from all the cowboy novels I read.

I was ready to take over as the fastest draw in the Wild West – and I practiced and practiced with a pretend revolver. Billy the Kid had nothing on me!

And so I landed in the Wild West of Toronto to start the next chapter of my life.

I arrived in Canada in September, right in time to start high school.

You probably remember starting high school and thinking “Are the other kids gonna like me? Will I make friends and fit in?”

In my case, there was one little problem to overcome that made my experience slightly different from most kids: I didn’t speak English!

There was a wonderful “English as a Second Language” (ESL) program at my school, but even with that, details like what’s being taught, what my homework is or even where to go were initially beyond me.

I remember being told in passing to go to the Upper Gym, which unsurprisingly didn’t sound anything like the word in my native language. I wondered “Who’s Jim? Where do I find him? And WHY?”

With lots of sleeve pulling and hand gestures, I eventually made it to gym class half an hour late.

And four years later, I won the award for the highest grade in my English class and moved to Ottawa to study Aerospace Engineering.

Resilience and persistence can help us climb mountains which seem insurmountable at the time.